The other day, we were talking on Skype to relatives in Bulgaria. In the obligatory exchange about the weather here in DC versus there in Kozlodui, we discovered that it has been unusually warm in both places. So warm, they told us, that in Kozlodui they had already seen кокичета (kokeecheta, snowdrops) blooming. Snowdrops, in December! It doesn’t feel quite right.

Snowdrops are the first flowers to appear, sometimes not even waiting until the snow thaws, and are therefore the harbinger of spring. Too small to fit in even the smallest vase and quick to wilt once picked, many people are still irresistibly drawn to pluck a few and put them in a small drinking glass—perhaps the one normally used for 50 grams of rakiya—to proclaim even indoors that spring is truly on its way.

Each bulb produces a single six-petaled white flower no more than six inches tall that points down to the earth it just arose from, in contrast to the many-petaled yellow sunflower the height of a grown man, which points up to the blazing high summer sun. In Bulgaria, the snowdrop grows in mountains and plains, around low bushes and in thick forests, in river valleys and in open glades. One can say the snowdrop is beloved both for its modest size and its vast domain.

Snowdrops apparently do not merely gladden the eye. They also contain alkaloids to treat Alzheimer’s Disease. Bulgarians have also used snowdrops to treat polio. But for most, what is important is simply the enjoyment of the flower and its symbol of the spring to come—not its potential medicinal uses.

In 1869, British officer Stanislas Graham Bower St. Clair and British consul Charles A. Brophy published A residence in Bulgaria; or, Notes on the resources and administration of Turkey: the condition and character, manners, customs, and language of the Christian and Musselman populations, with reference to the Eastern question. Inordinately patronizing—even sneering and jeering—and often erroneous, they did manage to capture some of the manners and mores of Bulgaria in the last years under the Ottoman Empire. St. Clair and Brophy note that on feast days, a Bulgarian man changes his sheepskin hat for a small red cap (perhaps the fez) “in which he sticks, if flowers are procurable, a bunch or two of roses or snowdrops…” It is worth noting that St. Clair took the name Hidayet Bey, fought in the Russo-Turkish War of 1877–78 on the Turkish side, and for a time controlled a large area in the Rhodope mountains. Photos of his gravesite show no snowdrops planted. 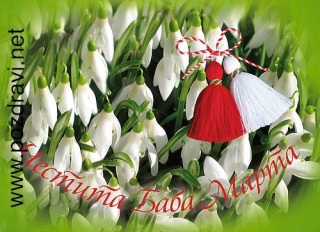 In most years, snowdrops begin to poke up at about the same time as Bulgarians celebrate Баба Марта (Baba Marta) on March 1. The ancient, pre-Christian holiday of Baba Marta brings the end of the cold and the beginning of spring. So it is appropriate that the red and white мартеници (martenitzi), donned on that day and worn until the vernal equinox signals spring has truly arrived, are sometimes garlanded with snowdrops and greeting cards join the two iconic spring symbols.

Perhaps climate change is responsible for this year’s early sighting of snowdrops in the Danubian plain. Perhaps snowdrops will bloom ever earlier as time goes on. Will they lose their role as spring’s harbinger, one they’ve held since time immemorial? Maybe in years to come the sighting of the snowdrop around the winter solstice will signal the cold winds of winter rather than the soft breezes of a spring just a few weeks away.