One day on our way to feed the horses in Borissovata Gradina, the children and I were surprised to see a car parked just outside the Vassil Levski Stadium metro station. It was parked inside an enormous glass box on the large sidewalk. A sign announced that Great Wall of China and Litex Motors of Bulgaria were partnering to build cars in a factory just outside of Lovech, less than 100 miles northeast of the capital Sofia.

The Bulgarian PM also knew exactly what to promise: good business climate, tax legislation, qualified and highly educated work force. The contract was signed in April 2009. Bulgaria became Great Wall’s tariff-free entrée to the European Union. For Bulgarians, this may have been a unique “through the looking glass” moment. The world’s largest Communist country, China, was sending a private car company to invest in Bulgaria as a capitalist member of the EU. In 2015, Great Wall made Forbe’s list of Asia’s Fab 50 companies for the fifth year in a row, but its stake in Bulgaria is only 10%. Bulgarian former wrestler and current oligarch Grisha Ganchev’s Litex Motor supplied the other 90%.

Autoreview.bg gushed on opening day in February 2012 that the 500,000 plus square meter factory was “one of the most modern automobile factories in Europe.” Of the 120 workers actually employed on this first day, the “average age of the assembly line workers was 19 and the engineers 25.” Noting this fact hearkened back to the first decade after the 1989 changes, when job announcements often explicitly warned that applicants must be under the age of 30. What was said implicitly with such age requirements was that older employees long working for the Communist state were presumed to be unable to adjust to the new world order. Most of Great Wall’s employees weren’t even born before 1989, let alone with long working lives before the fall of that other Wall named Berlin. The New York Times was guardedly optimistic about the venture’s prospects. Just three months after opening day, Grisha Ganchev was arrested for tax evasion and fraud conducted through a criminal organization. The additional charge of threatening to kill the head of Bulgaria’s National Revenue Agency, Krassimir Stefanov, was dropped after Stefanov denied it had happened. Ganchev was released on bail. Great Wall/Litex carried on with car production.

Pre-1989, the Soviet Union and its satellites had more than a bit of difficulty resolving contradictory automotive desires. On the one hand, there was the desire to develop self-sufficient heavy industry that would prove the superiority of the Communist path. On the other, there was the desire to have reliable cars available to anyone who wished to purchase them. It was a bit of a push-me, pull-me. Sometimes ideology won, sometimes realpolitik.

Q: What must be included on the second page of the instructions for a Moskvich, Volga, or other socialist car? A: The full schedules of all busses and trains.

At first, the USSR simply shamelessly copied the West. The Soviet-made Moskvich was the German Opel Kadett by another name. At the end of what the USSR (and now Russia) referred to as the Great Patriotic War, they disassembled the German Opel car factory, moved it eastward, and began producing the cars themselves. Over the years, they introduced new models from time to time, but seemed unable to erase the sense that one was riding around in a tin can. 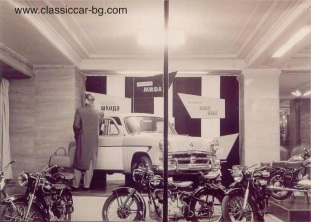 For many years, a Moskvitch was tantalizingly displayed in the ground floor window of the Central Department Store in Sofia (though I could only find a photo of the Czech Шкода). Unfortunately, the USSR was unable to copy German efficiency in producing a sufficiently steady stream of cars. My in-laws waited ten years to be able to buy their bright yellow Moskvich and it was not unheard of to wait as long as 20. My in-laws owned the car for considerably less time than the waiting period for purchase. In 1988, when after much bureaucratic wrangling from the Bulgarian side my future mother-in-law was given permission to visit us in DC, the yellow Moskvich was sold to pay for her airfare.

The respected Bulgarian weekly business newspaper, Kapital, opened its first article on the Great Wall/Litex partnership by dryly noting “Not a Moskvich…that’s how an advertisement for the new Bulgarian-Chinese automobile might sound.” Kapital also pointed out the irony that once again the technical know-how is coming from a “friendly socialist country,” albeit this time around from a private investor. 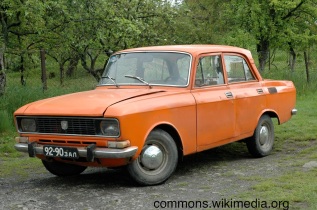 Q: Do you know why Moskvich owners are buried straight up when they die? A: Because their whole lives they were lying down under their Moskviches.

Bulgarians who did not wish to wait for ten or 20 years and had friends who could travel abroad had a brief window to “import” a foreign (aka, not from the USSR) car. For a time, cars could be purchased in, say, Germany or France or Italy, and then driven to Bulgaria. But authorities caught onto this preference for capitalist cars and imposed a 200 percent duty on their import, which essentially shut down the whole practice.

In 2015, Lovech’s Litex Motors/Great Wall plant was exporting cars to Macedonia, Serbia, Romania, and Italy with plans to expand the export market throughout Europe. Great Wall, however, has had its own problems with shortcutting the development process by simply copying existing car models of its competitors. Italy banned import of one Great Wall car on the grounds that it was a replica of a Fiat model. Japan complained that another Great Wall car was an imitation of a Toyota model. Xing Wenlin, Vice President of Great Wall Motors and the General Manager of its International Trade Division, says the times of copying have now passed. Kapital passes on a quote Xing Wenlin gave to Der Spiegel: “We already have enough money to develop on our own and to contract well-known designers.”

Nearly 50 years ago, the Italy flow of cars was a one-way street that took a wide detour through the Soviet Union. In 1966, the USSR partnered with Fiat, it not being possible to take a Fiat factory outright. The resulting car was called the Zhiguli in the USSR domestic market or the Lada everywhere else. In Bulgaria, if you owned a car at all, it was either a Moskvich or a Lada. Whether Fiat felt there was no point in bothering or the USSR thought the car already perfected, no significant design changes were ever made during Lada’s four-decade run. Reuters News Agency quoted official statistics saying 17.75 million Ladas were sold through March 2012. British auto journalist Jeremy Clarkson called the Lada “simply the worst car ever.” 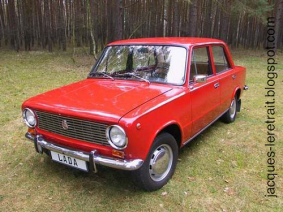 Q: How many people does it take to build a Lada? A: Four. Two to fold and two to paste.

In 1921, Vladimir Ilyich Lenin decided to bring a little realpolitik to bear upon the Marxist-ruined Soviet economy by introducing the New Economic Policy or NEP. The market was freed ever so tiny a bit. His death only a few years later ended that experiment. But beginning in 1960, Bulgaria created its own version of NEP to facilitate import and export with capitalist countries. Cars were included in this new policy.

The state-owned Bulet company opened a car assembly plant in Plovdiv and created joint ventures with French car companies Renault and Alpine. An agreement with Fiat allowed the popular Fiat 124 model to be assembled in Lovech. Bulgaria thereby circumvented the tortuous path by which it received cars from the USSR. Bulgaria’s version of NEP lasted longer than Lenin’s but not by much. The unexpected trade possibilities outside of strict government control frightened the powers at the very top. In 1969 and 1970, the companies were shut down and their managers sentenced to lengthy prison terms. The Soviets by then had flooded the market with their Zhiguli/Lada car. The Lovech plant began producing Moskviches.

You can go to the Great Wall Bulgaria YouTube channel and see videos shot in Lovech. They alternate images of car interiors, car exteriors, fully clothed men working on an impeccably clean factory floor, and midriff-baring girls wearing the shortest of shorts dancing in front of Great Wall cars parked outside.

Despite Great Wall’s marketing acumen, it is clearly under the same delusion as most Bulgarian businesses—that is, there is no need for a native English speaker to check its English-language communications. Thus, the English version of its website happily if peculiarly announces “The male part of Litex Motors Team, the Bulgarian vehicles producer, as a sign of solidarity and support to the cause Movember, brought up a moustache.” Though a striking number of educated Bulgarians now speak English quite fluently, businesses persist in believing that there is no need to spend a penny on professional English-language marketing when office secretary Penka has a nephew Ivan who has been getting such good grades in his high school English class. Traversing the languages in the opposite directions seems equally fraught. The Институт за Български Език (Institute for Bulgarian Language) charged with, among other things, language competence, seems not to have been consulted for the Bulgarian equivalent of “pick-up.” Great Wall simply transliterated the word into Cyrillic.

Chinese or Bulgarian versions of English-language marketing aside, Lovech as Bulgaria’s Detroit is getting a second life. Bulgarians who can afford to buy a car can walk into dealerships in 12 cities across the country. Italians who want to buy a Chinese car made in Bulgaria can do that too.

In a December 5, 2012 Financial Times article, Kerin Hope and Theodor Troev saw the automobile manufacturing sector in Bulgaria making a comeback. “About 50 companies…employ more than 9,000 people around the country. The sector racked up about €1bn of sales in 2011, accounting for about 4 per cent of total exports. Customers include Mercedes-Benz, BMW, Ford, Audi, Citroen, Peugeot and Renault.” Great Wall didn’t get a mention.

But just one week later, Kerin Hope devoted an entire article to the company. The article begins:

“Barely four months after passing his driving test, George Todorov won a competition on Facebook to promote the Voleex C10 hatchback, a Chinese car assembled by Litex Motors in Bulgaria.

The Sofia student answered the question, “Why I should win a car”, by posting a Photoshopped picture of himself next to a Voleex on the social networking site, along with the message: “You don’t often feel proud of being Bulgarian because of something that’s manufactured here, so I’m grateful to Great Wall Motors for making it possible.” The image was “liked” by more than 25,000 Facebook subscribers.”

On August 4, 2015, the Specialized Criminal Court finally started the trial against Bulgarian former wrestler and current oligarch Grisha Ganchev. On January 13, 2016, Kapital reported that Great Wall/Litex Motors temporarily stopped production in order to prepare for the assembly of new models. 200 plus employees, a bit shy of the promised 1500 plus, had been working there.

On December 11, 2015, Прес-авто клуб България (Press-auto Club Bulgaria) announced that Skoda won Automobile of the Year in Bulgaria for the fourth year in a row.