In 2009, the University of Kansas and Gallup presented the findings from a survey of more than 150,000 adults in more than 140 countries, a representative sample of 95% of the world’s population. “[The] results provide compelling evidence that optimism is a universal phenomenon,” said Matthew Gallagher, lead researcher of the study. Indeed, it appeared from the study that optimism could be found in countries rich and poor and in people young and old. But not, apparently, in Bulgaria, which ranked first in pessimism along with Zimbabwe, Egypt and Haiti. 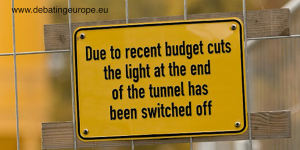 The results were not altogether surprising. Bulgarians cultivate pessimism with an almost peculiar sense of care and national pride. The origins of Bulgarian pessimism are unclear. Could it be rooted in the five centuries under the Ottoman Empire that Bulgarians for years referred to as “the Turkish yoke”? Could it be the inheritance of 45 years of Communist dictatorship that a large part of the current population lived through? Could it be the near collapse of the country politically and economically during the mid-1990s? Well, it could be any or all, but the University of Kansas and Gallup found optimism in countries with equal or worse histories to those of Bulgaria. 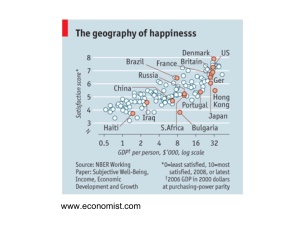 Whatever the reason, Bulgarian levels of dissatisfaction and general pessimism run deep and wide and not just in 2009. The rather dramatically titled “Global Barometer of Hope and Despair for 2011” aimed to ferret out people’s feelings about what the coming year might bring. In response to the question “So far as you are concerned, do you think that 2011 will be better, or worse than 2010?,” only 21% of Bulgarians thought the year to come would be an improvement. Bulgarians almost defiantly insist that as the poorest country in Europe economic difficulty is a matter of course. A lower living standard than in Western Europe in truth serves the country well by providing the theme upon which all authentic Bulgarian café conversation of any length is based. The economic means for adequate supplies of small potent cups of coffee (espresso by another name) and cigarettes can somehow always be found to energize the sometimes mournful, sometimes energetic debate that fed a 2010 worldwide economic study by the National Bureau of Economic Research. Reporting on the NBER study’s conclusions, The Economist magazine noted “the saddest place in the world, relative to its income per person, is Bulgaria.” 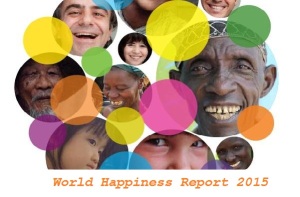 More recently, the World Happiness Report has assessed the state of global happiness in 2012, 2013, and 2015. In 2012, Bulgaria came in tenth from the bottom, seemingly happier only than Congo, Tanzania, Haiti, Comoros, Burundi, Sierra Leone, Central African Republic, Benin, and Togo. In 2013, Bulgarians were a tad less morose, coming in at 144 of 156 countries. By the 2015 report, Bulgarians were comparatively ecstatic at number 134 of 158 countries studied. So there is some improvement. Nevertheless, Ivan Krastev, head of the Sofia-based NGO Centre for Liberal Strategies, only one minute into his 2012 TED Talk felt he should warn his attendees that “according to the surveys, [Bulgarians] are among the most pessimistic people in the world.”

Over the years I’ve been visiting and living in Bulgaria, I have sometimes been reminded of the character Glum in the old “The Adventures of Gulliver” cartoon: “It’s hopeless;” “We’re done for;” “We’ll never make it, never.” Sometimes conversations play out with one or more in a Bulgarian gathering playing the Glum character and the others countering with what should be the self-evident examples of all the positive changes that have developed in Bulgaria since 1989. By no means is everyone you meet filled with doom and gloom. But generations of living with a pervasive and very real fear of a repressive regime quick to silence, however much that fear might have been largely in the background as people carried out their daily lives, has led to a natural reticence, an instinctive reserve and a tendency to disparage and underrate as a protective measure against at best disappointment and at worst real loss. Babies born in 1989 are now university-age students with no memory of a dictatorship, but many parents have taught by word or deed that same glum worldview. For many, despite the fact that the glass may in fact be half full if not sloshing over the rim, pessimism is an engrained cultural habit. 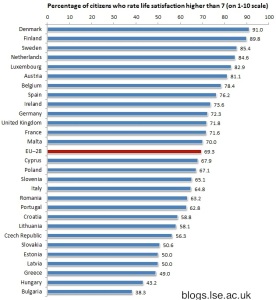 Europeans across the continent often comment on the degree of friendliness shown by Americans and this might be explained by the American tendency not to separate one’s public, social face from that one shown in private with friends and family. In many European cultures, however, one learns early how to draw a line between public and private behavior and this is true in Bulgaria as well. Civil servants, from a Ministry staffer to a city bus driver, seemingly cannot conceive of smiling during the working day—not professional, not good form—and would be astounded to learn what Americans consider to be an essential part of the good customer service they so highly value. In 1997, when the Bulgarian “socialist” (read former communist with a new name) government headed by Jan Videnov collapsed in the face of national protest against colossal economic mismanagement and hyperinflation, Sofia mayor Stefan Sofiyanski was appointed interim prime minister. One evening, the dark-haired and handsome 46-year old Sofiyanski appeared on the television news. I’ve long forgotten what the topic was or what his reassurances were in order to regain people’s confidence, but I do recall that he did not at all present a grim face and in fact seemed cheerful and optimistic, a real person instead of an automaton. Then the camera passed on to a Bulgarian woman watching him nearby and recorded her appalled reaction “Why is he smiling? I don’t see what he’s got to smile about.”

The reverse side is the absolutely tremendous, wonderful private face; the generous hospitality, the gift of one’s time, table and friendship. Hours are spent entertaining adults and children alike, whether with lavish meals or a few mezze (small dishes or appetizers)—no one looks at a watch, no one has a prior commitment or must dash off or conforms to a strict regime in getting the children to bed; there are no rigid children’s schedules to control the social interactions of the adults in their midst. No host or hostess would dream of even hinting that the guests should begin to make their way home—whether the gathering is in a restaurant or in someone’s apartment. Meet someone through a friend or even use that friend’s name as a calling card and that someone will be unstinting with kindness and attention and invitations to meet again or to show you his/her town if living elsewhere. When we travel, we look for semayni hoteli (family hotels). Getting to know the family adds to the pleasure of the travel itself. Despite all of the professionally documented and personally observed pessimism that certainly continues, if undeniably abating, what I miss most about living in Bulgaria is the warmth and generosity of the people and the time that is always available to spend together.