It’s the classic Catch 22 scenario. I find it hard to read in Bulgarian because there are so many words I don’t know, and I can’t learn more words if I don’t read in Bulgarian. The book I ever tried to read in Bulgarian was Деца играят вън (Children Play Outside) by Георги Данаилов (Georgi Danailov). My friend Vessela loaned it to me, certain that I would be able to struggle through it and I did. But it took a long, long time. I made a rule, often broken, that I could not break out the dictionary every five seconds or I’d never finish.

I didn’t even know until very recently that the Yuli around which each of the three parts of the novel revolves are three different, albeit with the same name, characters. But I forgive Mr. Danailov’s creative license for fooling me; I imagine no Bulgarian reader suffered the slightest confusion. I vowed to keep reading in Bulgarian every night, certain that improvement would follow. I broke my vow within days. Improvement by osmosis naturally did not follow.

Then we had our daughter and I was determined she know Bulgarian from the start. I spoke to her only in Bulgarian and began reading to her immediately. We collected Bulgarian board books and fairy tales and naturally these presented no problem. When we ran out, it was easy enough to translate English books on the fly. Since she couldn’t read, she had no way of knowing that Dr. Seuss’s The Foot Book did not really begin ляв крак, ляв крак, дясен крак, дясен (left foot, left foot, right foot, right). Most of Dr. Seuss did not lend itself to such translation—really, what can you do with There’s a Wocket in My Pocket?—but other simple early books did.

When she was in preschool, we went to National Geographic’s enormous Warehouse Sale in the cavernous D.C. Armory. 90 percent off their original prices! Among other things, she just had to have a book about insects. Suffice it to say that I had not previously made насекоми (insects) a focus of my Bulgarian vocabulary enrichment. I knew пчела (bee), мравка (ant), комар (mosquito), паяк (spider—and yes I know, not technically an insect), муха (fly), and хлебарка (cockroach). I put in the time. I did my homework. I learned богомолка (praying mantis), бръмбар (beetle), and щурец (cricket). I learned антена (antenna) and челюст (jaw), and жило (stinger). I couldn’t conduct an adult converation about philosophy or politics, but could talk a good game about the anatomy of various буболечки (bugs).

Having conquered the crawling, often flying world, I was ready for the jungle and ocean. Egmont Bulgaria put out Bulgarian versions of Discovery Kids books so we bought Амазонската Джунгла (The Amazon Jungle, published as Rainforest Explorer in English) and Безкрайният Океан (The Infinite Ocean, published as Ocean Explorer in English). So I was able to learn that a тукан (toucan) has a клюн while a папгал (parrot) has a човка.

In English, we’re a bit simpler—all the birds eat with beaks no matter the bird size or the beak size.

I learned that quite a lot can be translated literally—words like clownfish and zebrafish and swordfish. Just switch the adjective and noun order, and translate—presto, chango, you’ve got риба клоун, риба зебра, and риба меч. But that doesn’t always work. Jellyfish is NOT риба слатко, it most definitely is a медуза and the pain from its touch might well make you wish you really would turn to stone.

By this time, we had our son. His interests necessitated learning an entirely new vocabulary. I found myself growing conversant with върколаци (werewolves) and вампири (vampires). I asked the Sofia seamstress making me a skirt to save the extra material so that I could make a наметало (cape) for my little супергерой (superhero). He fell in love with a book on пирати (pirates) so I added плячка (plunder) to the list of words useful with the preschool set at the playground, but fairly useless when going out with other adults.

Clearly, I needed to find books I could truly read for myself—and vocabulary enrichment of an entirely different order. Having read the entire English-language Harry Potter series aloud to my daughter, I decided that I would embark on reading all seven books in Bulgarian. It took an embarrassingly long time to do it—two years!—but I felt triumphant. I put each successive book on my night table and made a rule that my bedtime reading could only be in Bulgarian. Of course, I do not need to use new words such as котел (cauldron) and мантия (cloak) very often, but I did find myself lost in the story for much of the time and much of the time—though not all—plunging on past the unfamiliar words.

Reading Bulgarian translations of English language books I was already familiar with was my key to getting over the Bulgarian language reading hump. Thus Agatha Christie. Easy to find in any Bulgarian bookstore and straightforward to read. Having read through Пет Малки Прасенца (Five Little Pigs), however, I did not find that I could solve mysteries like Hercule Poirot. It was not possible to know which child broke the plate or took the last cookie before dinner without being present at the scene of the crime.

In just a few days, we will leave for a month-long vacation in Bulgaria. I’ve read through all the Agatha Christie mysteries I had bought on my last trip. Perhaps now I’m ready to read a Bulgarian novel. Do you have any suggestions?

When I started to learn Bulgarian in mid-1995, I naturally began with vocabulary closest to home: food I ate, transportation I used, day/date/time, and so on and so forth. And one of the themes, naturally, was the family—my place in my husband’s family and how the people in his family were related. I had no idea then that such a simple thing in English was such a complicated one in Bulgarian.

There are many words in Bulgarian where one word in English suffices. I asked why one aunt is addressed in one way, a second in another, and a third in yet another. Some would answer that these were dialect and regional differences, some would answer that it was a mix of archaic and modern terms, and some would answer it was all semantics and the differing words in fact signified no actual difference in usage. Most people just shrugged their shoulders and said they had no idea. Even my two office colleagues who had finished their degrees in Bulgarian Philology weren’t quite certain and asked for time to reflect and research. It seems there is enough on this subject to literally fill an encyclopedia.

In fact, there are regional differences and there are inconsistencies in use and there are redundancies. While in English we don’t even try to understand exactly how this woman became your aunt (paternal, maternal, blood, marriage), Bulgarian relative vocabulary attempts to do just that. Thus the word “aunt” has at least four Bulgarian terms in active usage:

Complicating the already complicated, the first term is simultaneously used for a completely non-familial purpose, something I was in fact familiar with; in my Eastern European-descended family, I too grew up referring to my parents’ closest friends as “aunt” and “uncle.”

Not to be outdone, “uncle” as well parses out the precise relationship in at least four commonly used words:

To cap off this little exploration, I give you two more English terms and their Bulgarian “equivalents:”

In fact, so deep do I feel I have delved into these minutiae of family terms that I can’t help but noticing that the Bulgarians seem somehow to have missed one. If shurnaika (шурунайка) is the wife of one’s wife’s brother, then shouldn’t there be a word for the husband of one’s husband’s sister? Thankfully, there is only one word for one’s husband and mine was as confounded as I by all of the above and asserted that it was all too complicated even for a Bulgarian native speaker. And being that he has no sister, we need never worry how to refer to the non-existing sister’s husband.

Complaining about the difficulties may be a stock part of learning a foreign language, but there are of course wonderful discoveries to be made. You find unanticipated parallels, direct translations that really work, and idioms that can never be translated but that you can relish for the way they allow you to savor another culture. When taking a photograph in Bulgaria, be sure to encourage the subject to say zele (cabbage), not cheese. A Bulgarian man may admire the мацка (matzka or pussycat) passing by in her short skirt and high heels, but anyone will use пиленце (pilentzsay or chick) as an endearment in the same way an English speaker will use the word “dear.” If you literally translated these words you would confuse people, and possibly insult them. 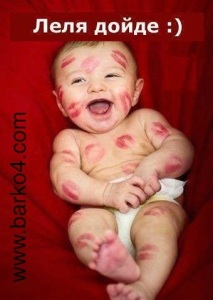 But you can literally translate the English expression often used by adults who can’t resist affectionately pouncing on the children in their midst, namely: “I could eat you up.” If language can shape thought, then the fact that here you can precisely translate between English and Bulgarian is linguistic evidence that two cultures of different experience and attitudes share some very important common ground in the expression of love between parents and children.